RADIO STATION IN B. M. 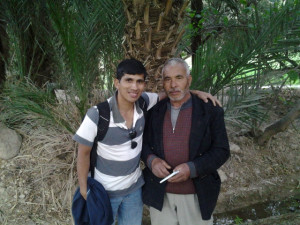 We arrived at the bus station at 7:30 am equipped with a marked map of our route and a list of contacts we were set to meet. Our international team of Gospel soldiers was there to send us off. We all prayed together in plain view before the bus left without knowing what may happen but trusting the Lord would be with us all the way. Our circle -with heads bowed, eyes closed, and hearts lifted up to God- must have been a strange sight to the onlooking Muslims at the bus station.

Prayer in Islam is done in a series of positions including standing with arms folded, bowing at the waste, and finally touching the forehead to the ground.

After a six-hour trip we made it to the mountain city of B. (pop. 164,000). This was our starting point. We called our five contacts in that city. These had all requested a New Testament online at our website. We contacted three people. All of them friendly and open, and we took some pictures with them and drank tea. A hotel was our dwelling place for that first night.

The advent of the internet has open doors in countries previously closed to the Gospel. Now a person can get online and search for information about Christianity and the Bible that would have only been available previously by books or personal contact. Over 8,000 Muslims have requested a free New Testament on our sister ministry website www.arabicbible.com. Many of these requestors live in small towns and mountain villages hours drive from the nearest house church.

The next day we called the last two contacts left, but they didn’t answer. It seemed they were not going to answer our calls. We thought it would be better to go to a nearby village and be able to get to meet more people and give away New Testaments. The closest village on the map seemed like a good place to start in order to be back to the city at night to try to meet with more contacts. An old, off-white Mercedes taxi filled to the brim with six passengers plus the driver took us to the village of O. with around 7,000 inhabitants (our estimate).

It was exhilarating to feel pressure and excitement at the same time. As the Children of Light we were sent into this village that sat in complete darkness as sheep among wolves. I was reminded of the seventy that were sent out in pairs to go into all the villages announcing the Kingdom of God (Luke 10:1). We took separate paths on dirt roads in this village and agreed to find each other in a planned spot.

After praying we began our work, I remember I left New Testaments under twenty or so doors and then stopped to talk to some people. Three people accepted the New Testaments as a gift. One of them, Mohamed, invited me into his house. It was five in the afternoon when I sat down on cushions lining the wall with steaming tea filling the cement room with its minty aroma. After a brief conversation he called some of his friends who had the same name. (Muslims often name their oldest son Mohammed) Before I left Mohamed’s house I had given a New Testament to all of them. With each interaction I was growing in courage.

Hospitality is both cultural and religious. In Islam hospitality is an important good work that the woman of the house can do to earn her salvation. A person would never sit at the home of a Muslim family without being served tea and something to eat. Their living rooms are always lined with couches that have no back or sides. Pillows that match the fabric of the couch are often used to rest on. Houses in the cities have their couch cushions sitting on wooden supports while the couch cushions in the villages are typically arranged on the ground with lamb skin on the floor and other hand-made carpets.

The “Mohammeds” wanted me to visit one of their friends with them named Ahmed. This guy, about 35 years old, spoke Spanish having lived in Spain for about ten years. We had a nice conversation in the beginning until he asked me if I was a Muslim. When I told him that I was a Christian, the expression on his face visibly changed. I explained to him why I was a Christian and what the Bible says about Jesus.

Because Ahmed’s brother-in-law was the imam (Muslim preacher and leader) of the town mosque he was more jealous for his faith than the average Moroccan. He was shocked as I told him that Jesus can forgive sins and that Jesus is God. I also showed him what the Bible says about those who believe that their works are going to save them. He thought I was a Catholic so he was a bit confused.

The great majority of Muslims in North Africa and the Middle East only have experience with the European Catholic brand of Christianity. They suppose, then, that everyone who calls himself a Christian worships Mary, prays to idols, and leads an immoral life. The Christianity that they reject is not the Christianity of the Bible but of their own misunderstanding. Less than 1% of North Africans have ever even met a born again Christian.

After answering each of his preplanned objections he just didn’t feel like talking anymore. I was about to leave the house when they suddenly closed the doors with me inside. Ahmed told me that they were about to pray. I just waited for a while. The five minutes or so that it takes for them to go through the ritual of washing and then prostrating in the different positions seemed like much more. It left me uncomfortable and burdened to sit so close to the worship of daemons. I was just a witness of a petition addressed to a deaf god. I prayed with a deep burden that day for each of them.

Paul confirmed that ‘the things which the Gentiles sacrifice, they sacrifice to devils, and not to God. And I would not that ye should have fellowship with devils’ (1 Cor. 10:20). So prayers offered up to a god who is not the Father of Christ are prayers to devils.

Following their prayers they took me to the main avenue and I gave Ahmed a copy of a New Testament. He accepted it as a gift saying he might read it in the future. As we took our leave he sarcastically quipped: “I hope you might convert somebody.” These words gave me an uneasy feeling so I called Joel immediately. We made the trip back to Beni Mellal in a hurry and returned to our hotel room. Feelings of fear and thoughts of doubt flooded into my mind.

Early the next morning we received a call from those that we had just left. They told us they were going to call the police. It was risky to stay and our last contacts had still not answered, so we decided to leave.

We took our seats in another large Mercedes taxi that would be stopping in mountain town of A. We were to meet a brother in this town. We were looking forward to a friendly face. After about thirty minutes on the bus we were startled to hear a word we understood being announced from the car’s radio. Our Arabic was still very rudimentary but we could understand the word: Latino.

I recognized Ahmed’s voice as he repeated my name and described what I was doing. The people traveling with us were listening, too, but thank God the audio was poor as we were going through the mountains. We later learned that yesterday’s village was a military area and that the police had been looking for us.

There is only one law concerning religion and it states, “It is illegal to shake the faith of a Muslim.” While many missionaries have been expelled and many Christians harassed on the basis of this law yet there is no Christian being held in prison for breaking this law in the country as of 2014.

We soon arrived in A. where we were to meet our next contact. We spent the next two days with Sliman (Slee-man), a dear brother in the faith. Sliman lives in a cement cube in the middle of a field, a two-hour walk on dirt paths from the nearest traveled road. He works by himself with no electricity. He first heard the Gospel with a battery powered short wave radio. Today he has a satellite dish mounted on top of his cement cube and a television operated by a sometimes-operating generator.

He has been a Christian for about 5 years. Last summer our brother Suffian who had coordinated our rendezvous baptized him on Easter. He had come to town just to be encouraged by our fellowship. He lives many hours from the closest house church. Our time together was sweet, relaxed, and punctuated with prayer and Bible reading. There is nothing like the presence of family. We had no idea how much we would need his encouragement for the trial ahead.

The Gospel has made dramatic inroads into every home in North Africa for a couple decades by way of radio and satellite TV. No matter how poor or remote the house, you will always find a satellite dish beaming in 1,000 free channels. There are many believers like Sliman who have believed on Christ before ever meeting a Christian face to face. Many still live separated from a church where they could be taught, encouraged, and equipped.

We must wait on God’s timing. Sometimes it is good to flee persecution and sometimes it is appropriate to stay. Boldness is required for any testifier of Christ and wisdom is to be his God-given companion.