Why Dispatches? Thanksgiving to God Part 2 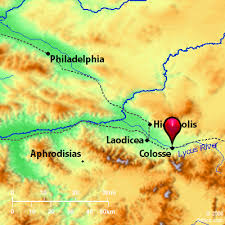 Colosse in the Lycus River Valley

I was previously questioned about why we are so open to report on the work in North Africa by way of our Saturday Prayer Points and a recent video that is currently being seen by many thousands. Motivations can easily be mistaken.

Yesterday I read Paul’s reason in his letter to the Colossian Christians: News of Gospel Advance from a distant land flows into an ocean of praise to the redeemer! Paul wrote (1:3-8) that Epaphras had brought him the news all the way to Rome of the faith of this small church in this remote city of Colossae. This was the smallest city that Paul wrote an epistle to and was one that he had not had time to visit. This was probably because Paul’s strategy focused on the major cities.

Epaphras reported that he had taken the news of this Gospel to this town and now was taking the news of the faith, love, and hope of this redeemed and beleaguered band back to Paul and all the brothers.

Why Epaphras? Why this great effort to spread this news? Why don’t you just do your work quietly and let God be the One who sees? Aren’t you full of yourself and your work? Aren’t you putting these believers in danger?

The why is in Paul’s first words: “I thank God and the Father of our Lord Jesus Christ always praying for you since I heard of your faith in Christ Jesus and your love to all the saints!” This news, Paul further explains in his letter, is coming in from all over the world as the Gospel bears fruit in all places! (1:6)

God loves to receive thanks for His great deeds! He delights in being praised for He is worthy to be praised! His greatest work is the remaking of man, the restoration of His image bearers, the redemption of the lost jewel of His creation! Let God be praised more and more! Let the news of His redeeming love and its continued advance into the last corners of this dark world resound from church to church by emails, videos, paper letters, and testimony-laced sermons! Let Christians in persecuted lands throw off their fear and willingly proclaim their faith in Christ to the whole world for this one purpose: That God might receive the thanks due to Him NOW on this side of His return!

I am thankful to be a small stream of Gospel news pouring into an ocean overflowing in thanks to the Redeemer!

This entry was posted in Ministry, Missions and tagged featured. Bookmark the permalink.