The Word and Courage: The Two Key Factors to the Success of Mission 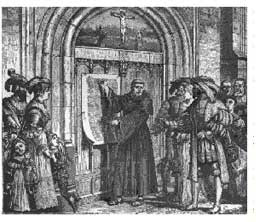 As I studied the rise of the Protestant Reformation recently, I came to understand two twin commitments that are wholly our responsibility. The circumstances God will be always organizing while He requires of me certain things to complete His mission. Let me take you on a whirlwind tour of what caused the Reformation to get to the final point of application for missions today…

The events leading to the rise of the Reformation were many and complex. The first was the ever-worsening corruption of the papacy. The Great Schism was the culmination of centuries of this corruption and the distrust of the popes led to a lack of faith in the papacy itself. The sinful and ignorant presence of the lesser clergy and the monastics also played an important role. The conciliar movement, which sought to end corruption, was itself dominated by baser men who further discouraged any hopes for rescuing the Catholic Church from evil hands.

Another factor was that the false teaching of the Catholic Church came into light as Greek became more commonly known among Western Scholars. Many began to read the original New Testament and become thus convinced that a return to biblical orthodoxy was needed. While the scholars put out doctrinal papers, the masses, who were being taken advantage of by the increasingly rich Catholic Church, were prepared to accept the message and throw off the yoke of taxes and indulgences.

Nationalism was growing at the same time feudalism was fading. As European languages developed the non-Italian Europeans began to view the dominance of the Catholic Church as a tool of foreign abuse. As the national view was changing so was the worldview of Western Europe with discoveries of new worlds to the West, increased travel to the Far East, and other advances like the printing press, in particular. As the people of the day increased in knowledge some came to believe that the Catholic Church was the cause of previous ignorance. These many factors when joined with people of great courage led to the Protestant Reformation.

One of these courageous men was Erasmus. Regarded as the “Prince of Humanists” by many, he called in print for Christians to leave the “pagan vices” in his famous Enchiridion Militis Christiani-Dagger. This focus on inward righteousness as the goal of Christianity was the impetus to seek the reformation of morals of the Catholic Church, it’s Pope, monks, friars, bishops, and local clergy. Erasmus himself sat out of he Reformation proper but his writings were key documents that motivated many zealous preachers.

Martin Luther’s Ninety-Five Theses nailed to the castle door in Wittenberg in 1517 is widely accepted as the official beginning of the Protestant Reformation. Luther’s use of the printing press and his unrelenting dedication to declaring and applying biblical truth catapulted and sustained the movement throughout Germany and other parts of Europe. On a political level it was Frederick the Wise who protected Luther allowing his message to continue.

Leading a parallel reformation to that of Luther was Ulrich Zwingli in the city of Zurich. His counter-cultural convictions were as well brought on by the dual factors of biblical teaching and abuse of papal power. He was cut down in battle but his reformation lasted.

This particular era of church history should inspire both a diligence to find the original teaching of scripture and courage to preach and defend the findings. As a missionary to Muslim peoples, this sort of dedication to the Word and courage is extremely necessary to build into the lives of new believers. Without the Word they will not have life. Without the courage to live according to that Word and preach that Word, the life they have will soon be stamped out. Truth and courage must go hand in hand here and today as it did there and then.

This entry was posted in Bible, Ministry, Missions and tagged featured. Bookmark the permalink.